Bike trip in april - part I

That's my first English story, hope to be readable. It's about a trip in the Banat county (Romania) together with a new friend.
Below is a photo which reflects my attitude: find a proper way to deal with the challenge.
You can see a kid and a cub there on my bike, but actually you're wrong!
There's my little girl and two cubs on the bike :)


See the cubs here, and the story below is linked to those puppies.  Enjoy!
------------------------------------------------------------------------------------------------
I was very interested when Roni announced me that his american friend, Matt, will come to Romania and would like to push some pedals and discover the hidden treasures from our countryside. I synchronized with Matt on the email, and I prepared the trip and a bike for him.
I was planning a serious, challenging bike trip, taking into account that Matt is a good, experienced rider. But our plans were almost cancelled due to his airplane delay in London. Instead of  landing in nearby Budapest earlier on the week, Roni picked up Matt and his fellow John on Friday afternoon, and they arrived in Arad at evening.
The adventure call was stronger, and beside their tiredness, our guests agreed and were ready to start travelling again the very next morning, but not very early.
So, we're loading the equipment in the Roni's van on a beautiful and warm Saturday, I said goodbye to my wife and my girl and we were heading towards Saua Jigoria (1200m), from where Matt and I continued on our bikes, while the others followed by walking.
It was already noon time when we started.
While pedaling hard on the beginning, on the steep hill towards Cuntu, Matt remarked I was not wearing the helmet, and he asked me why.
- Well, because we're climbing. - I answered. No speed, no danger. But I'm gonna take it later, when heading down.
- You Europeans, I forgot you don't wear helmets :) - he replied.
I don't know if he's right or not, but I was a little bit proud he sees me like a true 'European'.
The sun hit us hard when we're getting out of the woods at the Seroni Clearing (1400m), where we have found snow remains, and around them the crocuses were about to explode.
From there, the majestic Tarcu Mountain is showing  in full splendor, and the landscape is great. After entering again is the forest for another 2 km, the dirt road emerges between the old spruce trees near Cuntu (1450 m).
Next pics are taken one week later, during our bike trip we were somehow in a hurry and did not paid attention all the time to our cameras.
At Cuntu, we have meet Calin, which is a meteorologist there and also a volunteer ranger for the protected area. Calin is also a very experienced biker and skier, and organizer of several bike events here in Banat area. The newest is a 90 km road bike event, Cupa Max Ausnit, 8th of June. Together, we have organized in Tarcu in 2011 and 2012 a popular MTB contest: Maratonul Tarcu - Tara Gugulanilor, third edition will be in 15th of June 2013.
Tarcu Mountains become a Natura 2000 protected area since 2007, and together with Retezat National Park and Domogled-Cerna Valley National Park, they're forming the largest wilderness area on the temperate Europe, also known as the Retezat-Godeanu-Tarcu Intact Forest Landscape. Well, you can do a lot of activities on the Tarcu Mts, but stay on the ecotourism side!

At Cuntu, we're not longing, just refilled our bottles then approached the most difficult part of the track, a   dangerous rocky descent towards Strigoniu meadows. The soil there is so spoiled by the vehicles, that only big rocks are left on the road. There are two ways to deal with it: either at full speed, almost 'flying' on the stones (which is very risky - many accidents happened here during the contest), or with caution. Because there was no contest in place or between us, we easily reached the bottom meadow (1000m), without any problem.
The splendid weather condition allowed us to choose the hardest way from there. From the meadows, a dirt road goes down a long valley (20km) to the villages on the asphalted main road.  But that one is intensively used by forester's lorries, while traversing the woods the view is limited, so we continued towards Varciorova with a a small climb. After that, the marked dirt road easily lays on the sides of the mountain, but we choose the difficult variant: a mild ridge with pastures and meadows called Plesa, which is rising again above 1400m.
There's a narrow, steep path ascending that ridge (used only by motorists, and shepherds), and we had to push the bikes on it for several hundred meters. But the reward was great: 360 degrees open landscapes, snowbike, and also what was expecting us on the other side: the descent ride.
When biking on the ridge, the clouds were gathering quickly and we believed the rain will follow in short time. But the clouds migrated towards east to Tarcu, several hundred meters higher than our altitude.
The ridge was so exposed to the elements during the winter, that a lot of snow was still there, accumulated in large slabs, and beside the specific flora (junipers) which is pretty adaptive, a lot of trees were affected.

We said goodbye to the mountain where the paths were splitting, and we need to choose where to descend: to Ilova or to Sadova. I choose the way down to Sadova, which I knew from a leisure trip, but only a small part on the other side (starting from the village). The choice was not bad at all!
We emerged from the trees right on a grassy slope, very inclined, where releasing the brakes was something similar with a jump, or dive... we instantaneous reached dangerous speed level.
There was no speed limit sign :), so our adrenalin got high. It was cool, but risky: after some hundred meters, Matt suffered a snakebite, and we needed to stop and change the tube.
Well, I was not prepared to take a photo when walking along a puddle, somehow Matt just fell on top of a clamp of nettles, and he exclaimed: - It's stinging! .
- Don't worry, it's good for the rheuma!  (Sorry Matt, I could not refrain from telling this) :)

Then we headed toward the Sadova Nouă village, avoiding the dusty road and finding one better variant aside.

From the village (on the main street I was pretty close to hit a man with a fork on his shoulder), we headed down on asphalt passing by a wonderful pan. A lot of people were outside, working the land. We're filming and taking pics when riding.
Then we followed the national road to Slatina Timis, when we found an interesting suspended bridge over the Timis river.
Our target was Brebu Nou, where the Bike Attack riders were just celebrating their 10th anniversary (and we were invited). By making one of the most famous MTB contests in the country, Banat MTB Maraton, and by riding and discovering a lot of tracks on the South Western Carpathians (Banat Mountains) those guys really contributed to the growth of this sport.
I was choosing actually one of their tracks to reach Brebu Nou. First we pedal on a forest road (Matt was easily leaving me behind, but then he needed to repair the tube again), then suddenly a small path was to be climbed across the river. It was something to push, and to carry also because chopped trees were on the inclined path.
We got out near some huts, used by the villagers in summer to shelter the cattle.
Matt found the buildings very interesting. We entered one, but some more were degraded nearby. Also the orchards seemed abandoned.
This one still serves as a cattle shelter, but the herds were not yet arrived. They're here on the hills during the summer (or even up to the mountains).

Then we took a wrong direction, but not for long. The rocky trail attracted us, being so inviting, but after a hundred meters begun to descend, so we needed to turn around.
We have seen there lots of trees, all dimensions, chopped recently,  Small trees, what for? Maybe they want to clean the hill, for the cattle, I presumed.
We gently passed some hills towards west, near a wind measurement antenna (anemometer), then advanced on a plateau and finally spotted our destination, down near the Trei Ape Lake (3 Waters).
We reached the asphalt and then descended to the village.
In Brebu Nou 167, dozens of bikers gathered together to celebrate riding for the Bike Attack team anniversary. I meet a few friends, and we decided that this was the best place to spend the night.
Roni and his kids, together with John arrived soon, so our team was re-united. The hunger was big, so we took the dinner and then some of us went to sleep, some others stayed outside at the camp fire, in a very good and decent company. The beer was great, too!
The next day, another adventure, we planned to reach Cheile Nerei and I discussed with other riders for the best way, but more on this later... to be continued. 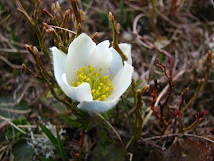 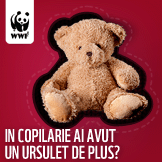 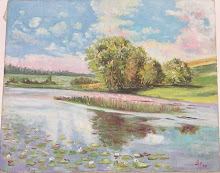